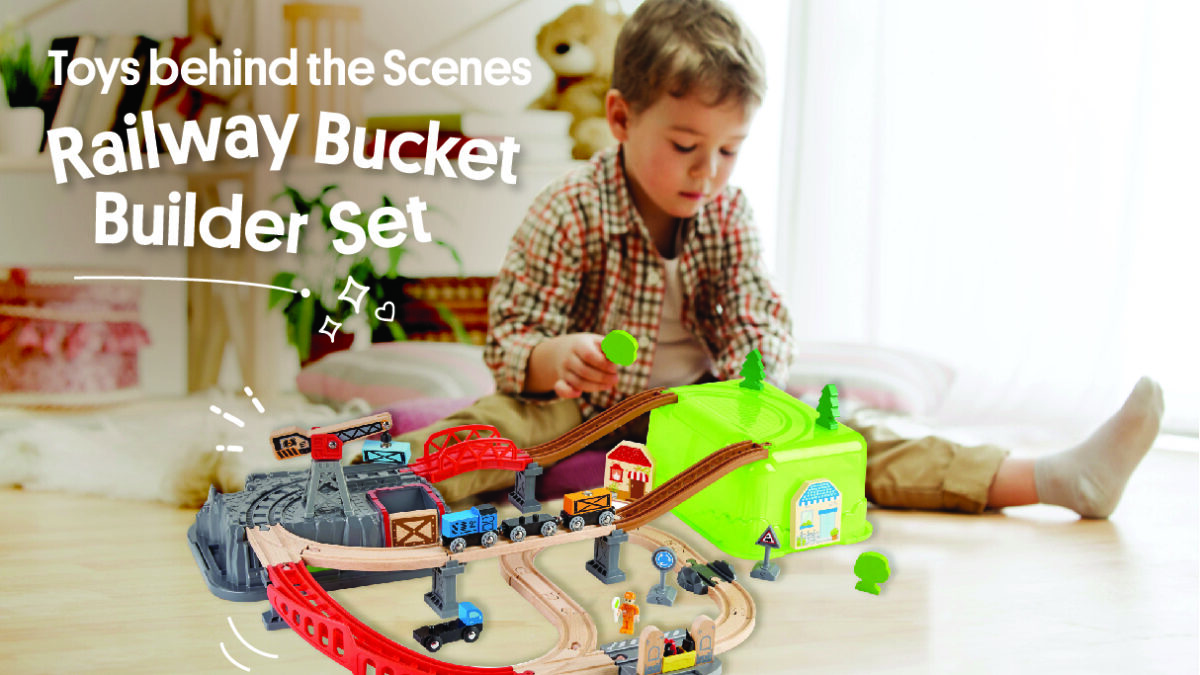 Toys behind the scenes

What’s not to love about trains and railways? This toy with a vintage charm still has a lot to teach for kids. If your little one struggles to stay focused or sit for more than five minutes straight, let them play with a toy train. Building railroad tracks and moving the convoy around may be an educational experience. 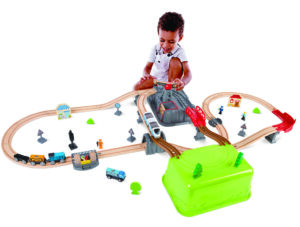 Hape introduces the Railway line consisting of a range of independent and compatible products. Among them, the Railway Bucket Builder Set allows you to design and build many environments. The system of high-quality interlocking wooden pieces takes the traditional toy-train game to new levels.

As budding engineers, children can establish the station around a city, a mountain mine, and many other settings, following the instructions or letting their imagination run wild.

Let’s find out all the features of this toy in detail.

Hape Railway Bucket Builder is a toy suitable for ages 3+. Kids can create many different circuits by combining the 50 curved and straight pieces with ramps and joints. They can take inspiration from the indicated models or improvise at will.

The box also becomes part of the game: the gray lid turns into a rocky mountain while the green base becomes a hill on which convoys can climb up with their goods. Besides, its independent pieces are compatible with other sets of the Railway line. The path of your train, therefore, has no limits! 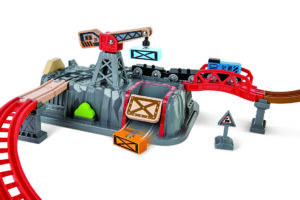 The game’s magic soon captures children: working on combinations and paths, they concentrate for a long time, without even realizing it. By learning the rudiments of planning, the young brain trains patience, concentration, and goal pursuit. This seemingly simple game sets in motion creativity and logic. There lay the foundations for those problem-solving skills that will allow children to give simple answers to complex questions in the future.

The importance of playing with trains for children

Playing with the train is an activity that involves two main phases: the construction of the railway circuit and the movement of the trains on the rails. Both activate different abilities in children, prompting them to reflect, invent, and plan.

What better way to understand that there may be different ways to get to a solution than by creating different paths? The infinite possible ways of assembling the tracks are an extraordinary training ground for the muscles of creativity and imagination, logic and problem solving, planning and concentration.

Building and learning, learning and building

Deciding how to assemble the tracks, shape the path, and move the train, requires the activation of strategic thinking. Running the train along the tracks means making it overcome or go around obstacles. Is it better to create a ramp that goes up the hill or go around it? Is it better a longer but linear and plain path or a shorter but impervious one? While playing with trains, your child will find that the same problem can be solved in many different ways, improving their thinking and planning skills.

Assembling the tracks thus becomes a way to learn to face difficulties without getting discouraged in the face of small or large problems. At first, it may take some time and some serious thinking. Your budding engineers have to figure out how to get the train up the hill or give the route the desired direction. Over time, though, they will become more and more skilled. You will see them design multiple-level tracks, eight-shaped circuits, buttonholes, and ups and downs for the convoys to ride. And this, my dear, is what we call problem-solving.

Get off the rails, folks – imagination comes running wild!

Around the age of three, children begin to require more demanding challenges. Repeating non-complex actions reassures them but exploring variations stimulates their imagination. 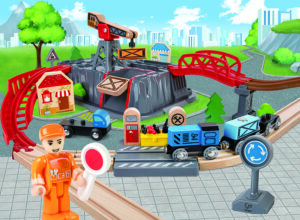 That’s why construction games are a great idea – putting the pieces together is a very relaxing and soothing activity. At the same time, the act of conceiving something new is fun and engaging. Create new routes and adventures for the train calls into question the imaginative abilities of children. Like a muscle, creativity becomes more robust and flexible with use. And this gift will be of great help to your child even as he grows up.

Have fun building different environments with the Railway Bucket Builder and other compatible Hape products. The kit includes: 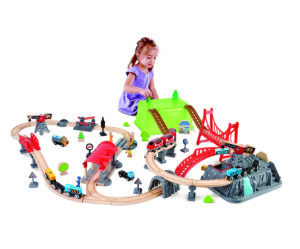 The same toy that years before gave us parents so many emotions is now ready to entertain and raise a new generation of train enthusiasts. As budding engineers, children can build the station, a city, a mountain mine, and many other places around it. Then, as young stationmasters, they can direct the railway traffic, relaxing and learning to remain calm and focused.

Find out more about this amazing train set that allows you to build your city, adding a modern twist to a timeless game.

Toys behind the scenes

Toys behind the Scenes: Learn with lights ukulele

Hape, 10 months ago 7 min read
Toys behind the scenes

Hape, 2 years ago 5 min read
Toys behind the scenes

Hape, 1 year ago 5 min read
Toys behind the scenes

Hape, 2 years ago 5 min read
Toys behind the scenes

Start making your own music with this beginner’s instrument set! Learn to play the ukulele, tambourine, clapper, rattle and rainmaker yourself – then bring your friends together and start a band.

Pounding sends the balls tinkling over the xylophone. Pull out the keyboard and the xylophone can be played solo. Winner of the 2018 Cribsie Award - Favorite First Musical Toy

Play by yourself or with friends! Choose a number then take turns catching fish until someone catches the special one! Or you can add up all your fish's numbers and see who has the highest score. 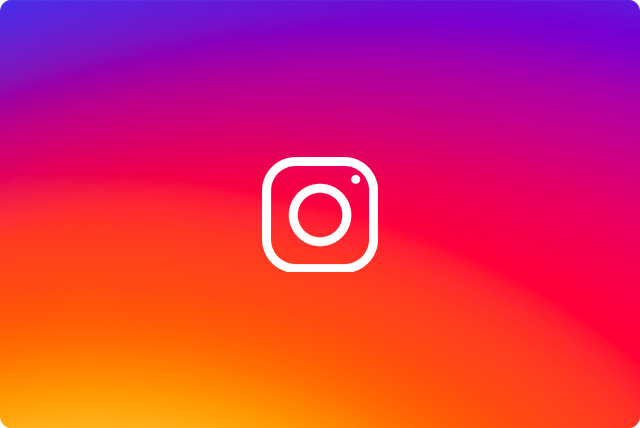